Uplifting Unity and Spirit
for Ourselves and a Kindly World

A Model for Study
Hope, healing and possibility for ourselves and our World
has been introduced by an up- and- coming Faith with unity as its watchword.  It has invited study of its communities and ways, which include unique spiritual governance and systems set to reverse the loopholes,  wrongs and abuses of former systems.
The resource for this article is The Baha'i Faith,  which has made unity in diversity a priority in all things with communities, planning, governance and projects focused around that theme. Their systems are unique, and they have invited all people to look into them as "a model for study." We hope none will find this inclusion to be offensive in these pages, for it has inspired many works herein and reflects matters that are pertinent, timely, interesting and thought- provoking.

WHAT IF --   you were told of a Faith that eschewed all conflict and inequalities of race, sex or religion; whose teachings encouraged personal investigation of truth, and acknowledged the necessary harmony of science and religion? What would you say? Could your heart soften and open in hope for our world?

Could it give you hope to think that there are millions of people around the world involved in a Faith which holds unity as its central goal, accepts the common truth and oneness of all religions, upraises the human condition, and acknowledges that we all go to the same "place" after death, although our personal stations there may vary?

Would you think it possible that religion could give credednce to scientific thinking, calling out the human capacity to recognize truth and challenging us to think for ourselves, investigating beyond tradition, superstition or personal prejudice?

Could you be comforted to know of the promise held forth by a Faith focusing on the oneness of humankind, believing unity to be the must-have, "bottom-line" solution to the world's troubles, acting and investing towards that end?

What would you say of a highly unified worldwide Faith which arose independently, not as a sect or division of anything else-- whose Founder diagnosed disunity as a "disease" that is eating away at all we hold dear, calling for "deeds, not words" in creating a needed "salvation" that goes far beyond individual spiritual need?

Could there be a Faith that has successfully demonstrated and utilized unique, unifying tools suited for a diversity of worldwide uses, setting in motion a plan to "humanize" the global arena, and politics-- without bias toward any particular loyalties-- demonstrating outstanding ability to coordinate and harmonize the widely diverse peoples of the earth, of all religions, races and creeds ?

Could you believe that a religion could bring forward a unique grassroots, political or non-political model for global co-operation independent of promoting its own self- interest ? 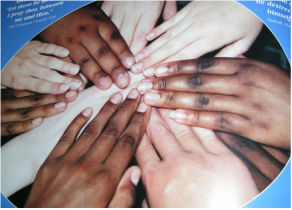 That may well be what has already happened, perhaps even more than we may know.

Could this new model, studied by scholars and found to remedy the common flaws of known governmental systems* hold a key to solving the world's problems? Could this co-operative system and way of governance offer a powerful remedy for world unity and peace? It was introduced by the Prophetic figure of Baha'u'llah in the early nineteenth century.
Described as "just and fair", "Divinely inspired", "unsurpassed", "amazingly practical", and "blending the best of the best in governmental systems", millions of Baha'is around the globe are using, embracing, and are further developing this system. And they would answer these questions with a resounding "Yes"!
These timely realities are manifested and growing in none other than one of the fastest growing Independent world religions-- the Baha'i World Faith.
Could such a religion-- or any faith, in fact-- take a vital role in the necessary changes needed to redeem a collapsing, degenerating world system unable to meet the needs of our time?

Unity, the Baha'i's say, is the key and necessary piece that can enable us to fully meet the challenges of today's need for a just unity that allows plenty of room for diversity. A major paradigm shift, on both large and small levels, is required for the integration of unity into a truly new international pattern.
The Baha'is believe that such a shift cannot and will not come about on the shoulders of human effort alone; a powerful, spiritual or emotional influence must needs play a vital role, and must be introduced in a compelling, thoughtful, inclusive way. It may be that this emerging Faith, with its global and practical experience, powerful teachings, and connection to the divine, has the vitality, motivation, and inspiration to bring what is needed to the table of peace.

Against all the forces of destruction, chaos and oppression that afflict humanity, there are forces on this planet that have yet to be reckoned. Among them, outstanding in originality, longevity, and achievement, is the religion of the Baha'i. Growing slowly and steadily from its 19th century birth in Persia to its establishment in the cradle of the Holy Land, the Faith has already established a remarkable first in the history of the world. Its Founder, Baha'u'llah, promised that it would never be divided, for its very purpose is that of Unity.
Indeed, this faith has amazingly survived nearly 150 years, whole and intact, having generated no enduring divisions, sects or schisms of itself. Powerful testimony of a near- impossible feat in the history of human nature's meetings with the religions of the world, perhaps a hopeful harbinger of a turning point for our planet... 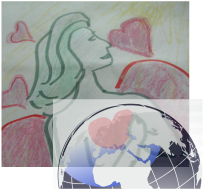 Unity-- An overwhelming proposition for our planet.

Baha'u'llah, Prophet- Founder of the Baha'i Faith, paid the price for such a mission, far beyond His time. He was met with bitter oppression, torture and persecution. A love beyond the ordinary, an acceptance of the heartbreaking burdens heaped upon Him, and His magnetic figure and matchless words mesmerize and inspire many to this day. Over 20,000 of His followers met with martyrdom for their beliefs in the early days; many more now believe the Baha'i solution to be indispensable in meeting the challenges of our time.
This independent Faith, now worldwide but still oppressed in its Islamic homeland, is host to over 6 million Baha'is, committed to the power of Unity and to the foundations laid by one whom they proclaim as "Master of the Age". The Baha'i teachings may well be the Original Source (circa 1850) of many ideas that are now moving the hearts of the worlds' peoples towards our planet's redemption, "seeds" that are free for the taking, cheering for the heart, and revealing for the needs of world unity, co-operation, and salvation.

A Faith that can help to unify the world! "That's ridiculous!", you may say, for religion has ever been a cause of disunity, having generated great enmity and countless sects due to power plays and disagreements among its adherents. Baha'u'llah himself agreed, and rebuked the priests for perpetrating misconceptions and abuses in religion's name. His writings clear up much of this, and form a powerful basis for a healing and healthy re-creation of our concept of "religion", reuniting it with Spirit for all time.

Baha'i's believe a new Day has opened. A unique, independent religion; this diverse, worldwide Faith accepts, reveres and builds on the previous Great religions of the world; offers a working, workable, worldwide, administrative model of unity clearly akin to "one soul in many bodies", and demonstrates the powerful potential therein.

The second most widespread independent world religion, the Baha'i Faith is now the fastest growing. In communities as diverse as Sudan, South Africa to Yugoslavia, Argentina, and Kau, Hawaii, unity is the business of the Baha'is. Marching together, hand to hand and foot to foot, they know that the greater the diversity of their numbers and the closer their unity of thought, spirit, and action becomes, the greater the Power of that Unity. and its possibilities for a world at peril. As part of a widely diverse, global institutional framework they see their system as uniquely suited to the needs of our time, and theirs as an organization that embodies many of the necessary elements for a healthy, vital, diversified world co-operative system truly that can truly be responsive to the needs of the people.

At this critical time in history, we must energize and make full use of all tools of power that lie within our grasp. Baha'is hold that religion, historically the basis of our laws and civilizations, is a great tool of power, when put to its rightful, harmonizing purpose. For today, that purpose must be to galvanize, inspire, and steady the people for a cooperation previously thought impossible. Unity is vital in moving to the next challenging level in the healing of our world.

Excerpted from the Baha'i writings...

The Baha'i Faith "upholds the unity of God and His Prophets, and inculcates the oneness and wholeness of the entire human race. It proclaims the necessity and the inevitability of the unification of mankind, asserts that it is gradually approaching, and claims that nothing short of the transmuting spirit of God, working through His chosen Mouthpiece in this day, can ultimately succeed in bringing it about. Many forces may work together in this achievement, but it must needs draw its essential power from this Motivating Force..."

The Baha'i's call us to "the primary duty...of an unfettered search after truth," "declare(s) the purpose of religion to be the promotion of concord"...and recognizes the force of the power of God working through the faiths of the world as being a "foremost agency for the orderly progress of society."

The Baha'i say that:

• Disclaimer The words of this page draw on the teachings of the Baha'i, yet they are solely the understandings and opinions of the author, and do not claim to represent the Baha'i Faith . FindBaha'i official pages at : Bahai.org

* Note: Re: Sects or schisms in the Baha'i though there have been some dissenters, the minor splits engendered have never gained any credence or power. More information can be found at Bahai.org
_________________________________
Hearts Awaken Copyright 2005-2020 Use with permission -- All Rights Reserved
May the Hearts Awaken to embrace forgiveness and a new healing, allowing for all possibilities in meeting the needs of a hurting, harassed humanity.